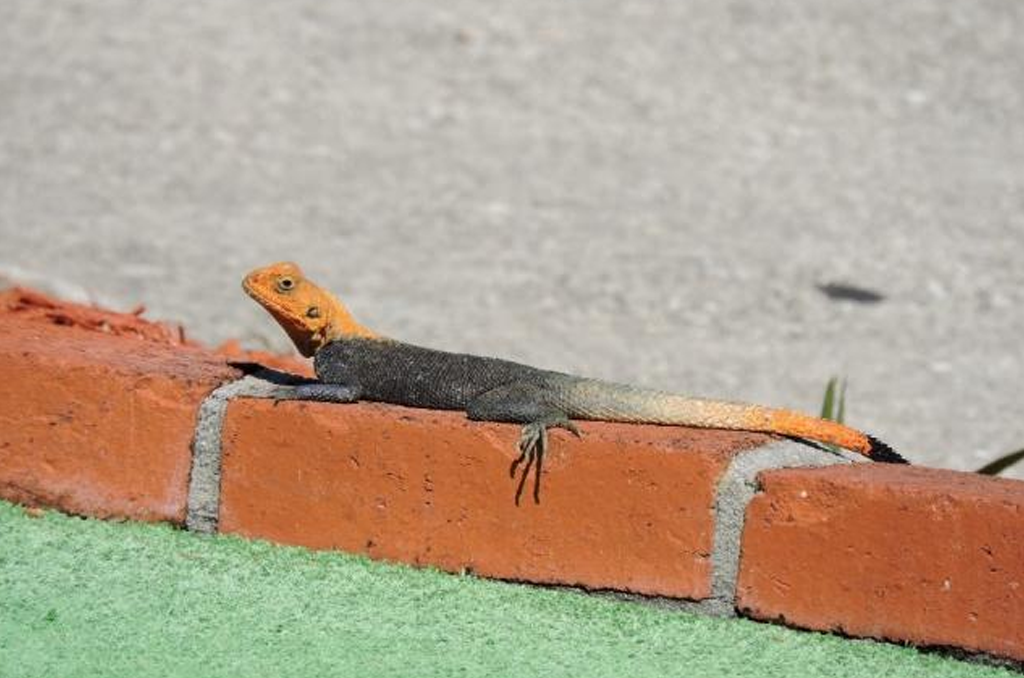 Florida is no stranger to invasive species of any kind: bugs, insects, reptiles, plants, you name it, we’ve got it.

Earlier this year, Florida had a new character on the block, the Argentine Black and White Tegu, but this time, it’s the red-headed Agama picticauda lizard.

While not yet considered to be as serious of a threat to local species as the tegu or the Burmese python, scientists are still on their toes about their potential effects on Florida’s animal kingdom.

“At this point we don’t see the agama as a huge threat to local wildlife like the Burmese python or the tegu, but we know that the populations are growing in South Florida, and we know they eat insects and other invertebrates,” said Steven Johnson, a UF/IFAS associate professor of wildlife and ecology and co-author of a new species report and fact sheet on the reptile  “ We want to involve citizen scientists to help us understand more about this lizard.”

The Peter’s rock agama lizard is native to sub-Saharan Africa and loves insects. However, that poses a threat to some rare, protected, and endangered species of insects, such as the Miami blue butterfly.

Scientists at the University of Florida were bombarded with emails from residents all over South Florida asking to help identify the lizard, and was a major sign indicating an invasive trend in the state with sightings reaching as far south as Big Pine Key.

The red-headed species is quite hard to miss—especially during their breeding cycle. According to the species report, the lizard can grow upwards of a foot in length, and males can be recognized by their prominently marked orange or red heads, black-grayish body, and a black-tipped tail with orange striations.

Scientists have not yet been able to identify the Florida diet of the species but are aware that it faces no real competition in the wild and will likely maintain its native range diet of small bugs and invertebrates.

“We have seen video footage of a large male attempting to eat a monarch butterfly. Though the butterfly escaped, it lost a wing and likely died shortly thereafter,” said the report. At times, the agama has been observed eating small mammals and birds as well.

While the video is a sample of what the lizard’s diet may evolve to in Florida, a butterfly killer diet has no consistent trend yet. Sadly for other endangered butterflies in the region, they may soon be sharing the same habitat.

Scientists have not located a specific region that the lizards may be occupying and are working on mapping out their distribution throughout the state. Still, according to more recent sightings, they seem to gravitate and hang out in more city-like and urban areas than the wild. In other words, Florida residents are more likely to spot the lizard at their local park than at the Everglades.

“We are the global epicenter of reptile invasive species introduction,” Johnson said. The Sunshine State is home to the world’s largest population of non-native species of reptiles and amphibians, largely due to South Florida’s active exotic trade market.

The species was first introduced to Florida in 1976 via the pet trade and likely grew via escape methods or being released by its owner—much like any other invasive species. The agama likely began its spread in the Homestead area, the ideal subtropical climate for a spreading.

So far, the lizards are not expected to pose a threat to humans, or their domestic pets, and residents are encouraged to report any sighting via the EDDMapS reporting system.