In Florida, a multimillion-dollar battle against mosquitoes has begun in the wake of Hurricane Ian 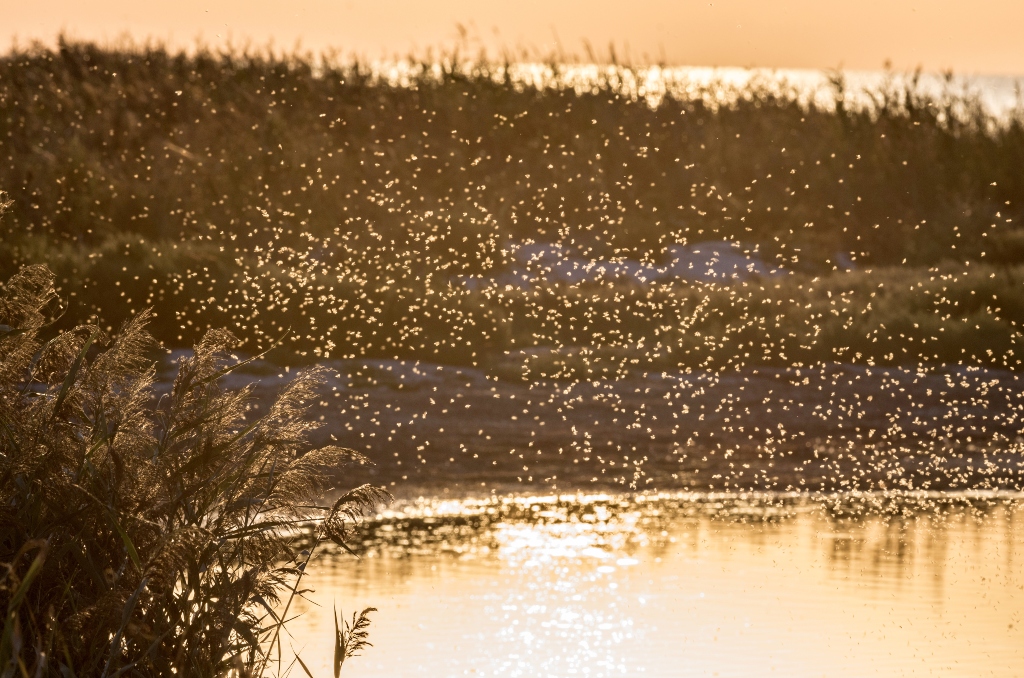 Swarm of mosquitoes over lake – Courtesy: Shutterstock – Image by: VladKK

First came the storm, then, a plague of creepy crawlers.

Hordes of pesky mosquitoes have magnified in debris and floodwater left behind in Hurricane Ian’s devastating wake, and now swarm communities in Florida.

Local and state officials are waging a multi-million-dollar war against the aggravating bugs, which are known to spread diseases such as St. Louis encephalitis and the West Nile virus, as they try to combat the voracious insects and keep residents safe as crews work diligently to repair power lines and rebuild infrastructure.

“The mosquitoes are out there, and they’re biting,” said Eric Jackson, the deputy director of the Lee County Mosquito Control Division. “It is a constant effort to knock down as many flying, adult mosquitoes as fast as we can.”

After the initial tragedies caused by hurricanes or floods, other threats follow, including respiratory diseases, bacterial infections, and illnesses from pests left in standing water. Mosquitoes are a typical, irritating, and sometimes dangerous secondary consequence of large-scale storms, one that can halt rebuilding efforts and increase the risk of an outbreak if left unattended.

“Imagine a couple thousand coming at you. That’s the big concern after hurricanes and large flooding events,” said Daniel Markowski, a technical adviser for the American Mosquito Control Association. “The sheer number of mosquitoes can make any daily life activity horrendous.”

Since climate change is increasing the risk of more intense heat, hurricanes, and flooding, as well as creating conditions that are more favorable for the development of mosquitoes and their incubation of viruses, researchers expect these issues to be more prevalent in the future.

Florida mosquito control is about as high-tech as it gets in the country. The Lee County Mosquito Control District, a special district in one of the communities hardest hit by Hurricane Ian, employs a total of 100 employees, Jackson said. It has six planes, five helicopters, and 12 trucks that perform both aerial and ground pesticide spraying missions to fight mosquito populations.

Blood collected from caged “sentinel chickens” living at 17 sites within the area is regularly tested by laboratory workers. By doing so, officials will know whether or not the chickens becoming infected with viruses are contracting them via mosquitoes. Crews also keep a close eye on mosquito traps year-round to see where populations are taking off. “Landing rates” are tracked by workers checking to see how many mosquitos alight on them, or bite, in a minute.

In Lee County, mosquito counts within traps began to skyrocket about a week after Ian made landfall.

In contrast to October 2021, when the county’s traps collected almost 34,000 mosquitoes, the same traps had already gathered more than 107,000 mosquitoes in the first 12 days of this month. During the first half of October, there were close to 600 calls from locals and businesses asking the district to treat the mosquitoes.

Even sharper rises were noted in other Florida counties.

According to information reported to the Florida Department of Agriculture and Consumer Services, traps in Brevard County captured at least 22 times the region’s weekly average number of mosquitoes last week. Northeast of Orlando in the nearby Seminole County, there were almost 46 times as many mosquitoes than usual.

Bug control professionals know the exact sequence of events to expect after a major hurricane.

“The larvae are going to emerge in a week roughly,” Markowksi said.

On the first few days, crews focus on spreading larvicides. These substances include chemicals, oils, bacteria, and chemicals that prevent insect growth.

The issue is that flooding limits crews’ access. With so much water, there isn’t en0ugh time.

The first mosquitoes to arise after the storm are nicknamed floodwater mosquitos.

“Every mosquito habitat has eggs laying in the soil, waiting for this rain, [it] gets flooded and you have literally millions upon millions emerging at once,” Markowski said.